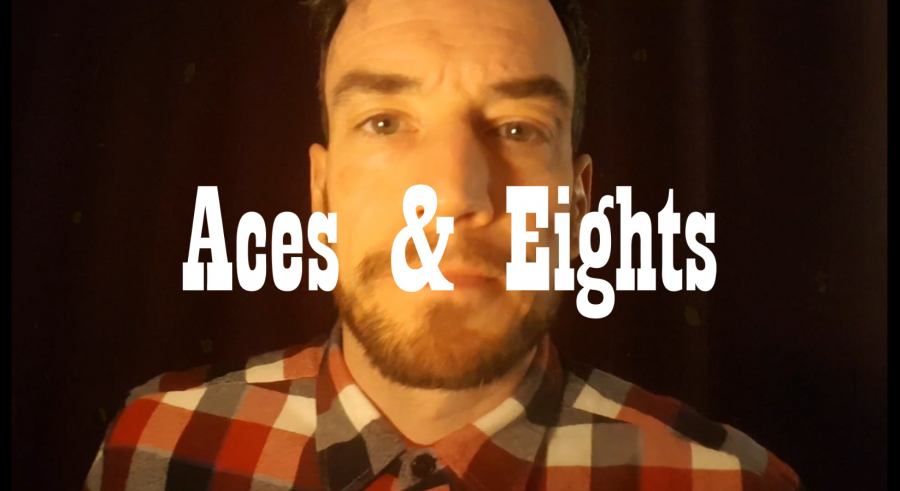 Genesis of a homemade rap video

I wrote Aces & Eights a long time ago (maybe twelve years?) and I’ve always really liked it. I’ve got a whole bunch of other rap songs and folders full of lyrics, but this one kinda came out fully formed and thus always seemed most like a complete piece. Except, I really wanted to make a video for it. And I had grand designs: I just needed a saloon, a campfire, a horse, some extras…

And that sat in the way of actually actioning the video project.

But then a couple years ago after a few early starts on making it a proper track, I got serious. I recorded the vocals, while I was in the studio doing the audiobook for TAKE IT EASY, and had the music and mixing done, to an incredibly high standard as always, by David Schmoll. I’ve been sitting on it since then.

Well, during the week in February that Chiara was away, I said fuck it and just recorded my video part on my phone in our spare room. FUN FACT: I whispered all the lines in the video because my daughters were sleeping upstairs.

Then I slowly poked around editing in the western footage from an old spaghetti western on Youtube. As a “make-learn” project, it was a challenge. My knowledge of the editing software, and I don’t have lots of experience as a video editor. But that’s why I enjoy projects like this: to get more experience.

The result of all that process is what you find above. I’m pretty happy with how it turned out. I hope you enjoyed it too.

Make it, ship it

I don’t always ascribe to the “make it, ship it” ethos. But there sure is something elevating about finishing a project, especially one like this that has been rattling around for such a long time. Now it’s done. It may not be perfect, but it’s off my plate and making room for the next thing. That’s a great feeling!