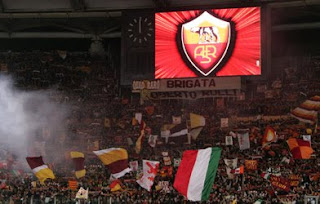 It’s on. Tonight. The real deal. The Roman Derby. Sure, the World Cup will be exciting and all that, but for today it’s all about the Derby della Capitale. Just to get a sense of the history, here’s the article I wrote before last spring’s forgettable shitshow.

It’s time to turn the page.

Roma is climbing the table after a forgettable start to their season. Vucinic is back in form and pumping in goals. The heart and soul of the team is Totti, and if he scores tonight, he will climb level with former Lazio striker Beppe Signori’s 188 Serie A goals. How much would he love to score against them? Afuckingtonne. Betcha he will too.

As for Lazio? They suck. But, this is the derby and anything can happen. Let’s hope that anything is a convincing romp for AS Roma, but expect a game full of literal blood, sweat, and tears.

Watch the video below to get yourself in the mood. And then watch the derby and yell and swear and cheer and drink. That’s what I’ll be doing.

(Via The Offside, where you should be checking Chris’s Roma blog).

UPDATE: Awesome! Roma won!! 1-0. Woooo! Inconsistent defender Cassetti came on as a substitution beforehttp://www.blogger.com/img/blank.gif the end of the first half, and I actually wondered if he might score (no kidding!) and he did!! And we partied. Of course, he also made a defensive error or two, but he actually looked pretty sharp. And he scored, and we won.

But while watching the game I remembered that the quality of football the derby produces is actually pretty low. A lot of ferocious emotion and hard tackles, and not so much ‘beautiful game’. But that’s the beauty of derby. It’s not in the football, it’s in the atmosphere.