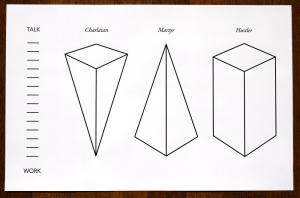 The walking, hustling, meeting, flyering, selling, and relentless energy output of the Edinburgh Fringe can be exhausting. Especially for newbies. Especially for this newbie, who seems prone to getting lost and either running out of flyers, or carrying around far too many and arcing from venue to venue, seeing shows and promoting. Fortunately, I’ve had reserves of fringe-newbie novelty/joy to carry me through the crucial first couple days.

Which is good, because my promotional strategy is… me handing out flyers with my face on them. And putting up some posters of my face and title. There are no tricks or gimmicks, no team, no uniforms, no stunts or make-up. It’s not much as far as a conceptual campaign, or a multi-pronged assault on swathes of festival-goers (nor is it leaving me time and space to focus on the show) but it’s all I’ve got.

I rode an initial burst of energy and flyered the shit out of this city for the two days before my first show. And not just flyering: I chatted. I met folks. I laughed. I schmoozed. I sold the shit out of my show. People liked the sound of it. Plus it’s free, right off the Royal Mile, and takes place at 12:30pm, meaning it’s unlikely to clash with your big-ticket evening events. All checks in the pro-column.

And, though I had no press juggernaut or hype machine, I was riding the strength of a few nice press pieces:

In short, I was feeling pretty optimistic about the audience.

Reality: my first audience was five people. Then three people from a production of The Bald Soprano came in late, swelling our ranks to eight (nine including me), but they also left early to go to their tech rehearsal.

Disappointing. But I took the setback on the chin. In fact, by some metrics, that’s a decent audience at your first Edinburgh Fringe. But I found it hard to stay positive about the meager returns on my promotional time-and-energy investment.

Today though, I kept at it, flyering and talking up the show, to whomever took one. My audience was close to 20 people. I don’t know precise numbers, because I was too excited to count. But it was definitely exponential growth. So I’m now out of my depression trough and riding the rush of an unsustainable hope that that growth will continue.

So to sum up, the Fringe has been first confusing and overwhelming, then depressing, and now ecstatic happiness. Overall: exhausting.

The good news is that I learned a trick the other day: instead of saying Edin-burr-ough, you can just say Edin-bra, thus saving yourself a syllable. Since I learned this shortcut, I’ve been using it on every occasion possible, and I’m feeling less tired as a result.

A few more tips and tricks like that, and my Edinbra education will be complete. Or, if not complete, at least sorted enough to help me plan next year’s assault. Strategically.