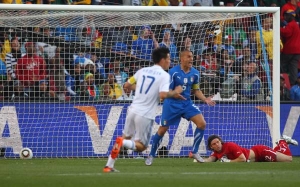 It was a sad day in my house yesterday. We watched Italy lose 3-2 to Slovakia and get bounced out of the World Cup in the first round, placing last in a pretty weak group.

The intensity of emotion here (which was admittedly pretty strong) is nothing compared to the anger, resentment and shame plastered across the Italian newspapers today.

The fact is, Italians – masters of the dramatic – are overstating the case a wee bit. The team wasn’t that bad. And Italy’s last 20 minutes were amazing, when they finally played with a sense of urgency and passion. The question is, why couldn’t they pull out perfromances like that earlier in the tournament – like say against lowly New Zealand?

Marcello Lippi is trying to take all the blame. And he probably should. Most of it at least. But the fact is expectations were too high, the team and the circumstances were not the same as four years ago (No Totti No Party) and the team was unable to perform under the pressure. Finally, they got desperate, channeled that emotion into their game and fought for their lives. But it was too little too late.

Chiara was crushed. And I too was sad. But as a fan you have to pick yourself up, give credit to the the plucky Slovaks, and carry on. And we’ll be doing our carrying on in England.

England also played terribly their first two games, but pulled it together for Game 3. All of it. They played with flair and purpose for the whole 90 minutes. And it wasn’t too late for them. They’re off to face Germany on Sunday. A match, that unbelievably and rather awfully, conflicts with my workshop.

I may not get to watch that game, but I’ll be cheering for England, because now that Italy is out, my loyalty’s are not divided: I want, first and foremost an awesome tournament. And, secondly and selfishly, I want England to win, so I can be at a World Cup victory party again.