Shooting Jesus in the Face 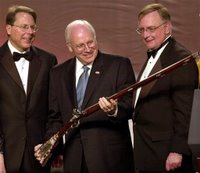 Relax. The incendiary title of this post is really just a form of the popular post modern practice of mashing-up two media forms. Shooting Jesus in the Face is just me mashing up my two most recent most favorite political tidbits.
One tidbit, easily guessworthy, is the news that Vice President of The United States of America, also known as the Dark Lord, or “Secret Keeper” shot a 78 year old friend in the face. It’s old news by now, but habituation to an idea doesn’t make it any less remarkable. The whole handling of the affair reeks of embarassing cover up. If this were a comedy and this guy was say Ferris Bueller’s principal, we’d be happy to see him so humiliated. And in fact we are. But Mr. Rooney was a character meant to be mocked, and constantly thwarted, Cheney is a man who is above all, very very scary.

Where does Jesus come in? 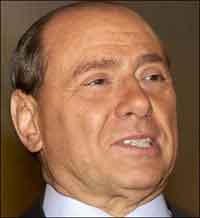 As quoted in February 27th TIME magazine. Silvio Berlusconi, another very scary politician, is quoted varbatim as saying “I am the Jesus Christ of Politics.” In the sense, according to him, that he’s a martyr to the nation. Jesus Christ is not something I would refer to Berlusconi as, but it is the first thing out of my mouth after reading another one of his inanities. However, I must confess, I’m actually more of a “motherfucker” utterer. At any rate, Berlusconi has also likened himself to Churchill and Napoleon as he heats up the election trail.
He also, in a bid to get airtime (which he can do at will anyway) he made a vow of celibacy until the election, like a Superbowl quarterback. 2 days later he retracted. Somebody shoot that guy in the face. Politically, I mean. Not personally. Actually it doesn’t matter what I write now, Google China won’t be clocking this anyway.