Tales of the Mundane: Waking up 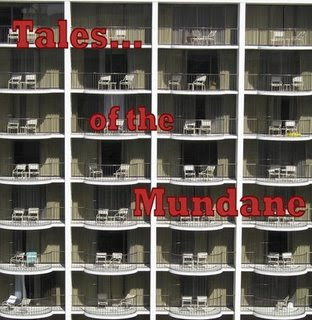 Waking Up: Part I: Waking up

I woke up. The alarm had not gone off yet. This was not that unusual, sometimes it can happen up to two times a night. What was unusual was the timing – the clock face read 07:37, and the alarm was set for 07:38. That is: the alarm was scheduled to go off in precisely one minute. I barely had time to comprehend the implications of my internal clock being so closely aligned with, yet slightly in advance of, the actual alarm clock, when the alarm went off.

I pressed the pressable face, silencing its digital beep. The beep is the perfect alarm noise: not jarring or unpleasant (or alarming), but definitely worth getting up for. So I did.

I sat up and turned to gaze at my wife. She was sleeping. With an effort neither Herculean nor particularly agile I clambered over my wife, out of our bed, and stood up.

Mild aches and pains coursed gently through my unbelievably muscular body. I had played football the night before and that activity involves alot of running. And kicking. Whenever I do alot of running and kicking you can be sure of at least two things: I will get sweaty, and I will wake up with sore muscles.

I thought about showering, but then remembered I had showered last night after football, I would not shower this particular morning.

Instead I got dressed. Bottom-half first. This includes both jeans and boxers – though not in that order. That would be silly.

Morning is not a time for silliness, it is a time for dread as you prepare for the long day of boredom and disappointment that stands dauntingly before you. Or, if you are of a more positive mindset: a kind of laissez-faire, “Meh, fuck it all over again,” attitude.

Waking Up: Part II: To the bathroom!

Next I went to the bathroom to apply some deodorant. The bathroom is right next to the bedroom, so I was there in no time flat. I have a new fancy deodorant that I received as a gift from my Brother-in-Law. It smells so nice I started using it almost immediately.

However I recently discovered that I had not yet finished my old deodorant, thus leaving me with two deodorants on the go. This is unnecessary; while I cherish freedom of choice, I am still at heart, a simple man. My brand of simplicity is the brand of a man who needs only one deodorant in the morning.

Thus, I opted to use the old almost-finished deodorant, and applied it extra-liberally, so I could be rid of it all the sooner, and rid my morning routine of this unnecessary double-deodorant complication.

The next stop this morning would be down the stairs: the kitchen. Where we keep the food. Quietly I descended, while buttoning my nearly wrinkle-free, office-suitable shirt.

As usual, I had only one task to accomplish in the kitchen this morning: lunch preparation. Often it consists of making a sandwich for my wife, and/or one for each of us. This morning I vowed to make her a sandwich that would not have tomatoes on it.

Nearly one year on, I’ve learned that marriage is a series of compromises. One example that springs readily to mind is the example of tomato on a sandwich. I like tomato on a sandwich – not all – but certainly most – sandwiches can be improved by the addition of some tomato. My wife disagrees.

We were at loggerheads on this issue, until I learned a valuable lesson.

“No matter how much you personally believe the taste of a sandwich would be improved by the addition of sliced tomato, do not put tomato on your wife’s sandwich. She does not like it.”

But sometimes, in my singleminded focus on designing and delivering the ultimate in nutritious and well-rounded sandwich, I lose sight of this lesson. Such is my dedication to sandwichcraft.

However, this particular morning I applied the lesson as surely as I applied mustard, lettuce, avocado and cheese to the slices of bread; though I felt a twinge of guilt, as I knew my actions were in direct defiance of the deliciousness of the tomatoes in the fridge.

It was done, and that is the crux. And wrapped in tinfoil, that is the preservation means. And left on the counter, to the left of the banana, where my wife was sure to find her tomato-less lunchprize. The banana was also part of her lunch. Lunchprizes, then.

Waking Up: Part IV: Back to basics

My morning routine inevitably involves a trip back up our steps to the floor containing the bathroom, both bedrooms, all my clothes, and my wife. Depending on the day this second pass can involve getting socks, a belt, a sweater, brushing my teeth, kissing my wife, grabbing a book, grabbing my wife, or some combination of the above.

This day it was sweater and a kiss. As it turns out, the weather warmed up later in the day, and I ended up carrying the burdensome sweater in my bag like an albatross around my neck. But the kiss I gave to my still sleeping wife was pretty nice, if unreciprocated.