The end of an automotive era 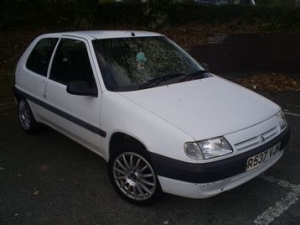 When we woke up this morning our car was parked on the street out front. It’s usually not there, because we don’t have a resident’s parking pass for the little lady, so we have to park it a seven minute walk away. Now we no longer park it anywhere. It’s gone. Our white 1998 Citroen Saxo, eight-year strong member of our family and veteran of three transnational moves has been set free. It’s a vehicle that’s acquired 150,000 kilometres, but still looks not a day over 80,000. Actually, that’s not true, it’s a crappy old car, but it was our crappy old car. More than the miles it’s got on it, it’s been loaded with memories. And now it’s gone. We’ve never been real car people – we’re bus people. Cyclists when we can be. I’d even prefer my old skateboard over the car. But having a car always afforded us the opportunity to drive places if we needed to. Sure, it was usually just IKEA every fifteen months or so, to pick up some candles and a houseplant. But still, there’s something about the promise of freedom that a car offers, even if I don’t like driving, or parking, or maintenance, or the political statement a car makes. Well, now it’s no more. Rather, it can only be speculation, memories revelled in while looking in the rearview mirror of Once Were Car Owners. Our adorable car has been taken off to get sold. We hope. The bad news is that for all the car was worth to us, it was worth a mere £175 to the dealer who purchased it. And that was the best offer we had, after many many phone calls. But the fact is that sentimental value matters little on the vehicular marketplace, which is ill-equipped to adequately compensate for continental roadtrips, airport pickups of old friends, or even that one time the car was towed. In fact the only thing the market can pay for is the ability of the vehicle to get to IKEA and back. Here’s hoping she’s still worth more than the sum total of her parts.