The Headbutt Heard Round The World 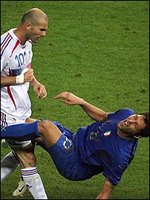 Zinedane Zidane violently headbutted towering Italian defender Marco Materazzi in the chest in the second half of extra time. Ending his sparkling career as one of the best European footballers ever in shame. Obviously he was goaded into it; apparently Materazzi said something about Zidane’s mother, suspects the BBC.

Well, every fan in Rome last night chanted “La mamma di Zidane e una putana,” on a fairly regular basis. And loudly too. But I suspect he’d be hard-pressed to headbutt each and everyone of us in the chest.

Though he’ll have lots of time to do that now that he’s retired from football in a spectacularly sour fashion. 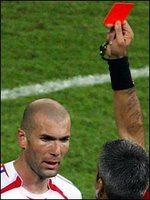 Anyway it’s too bad for Zidane who was such a class player alot of the time and whose return to the French national team had much to do with their success. And it’s a shame for Italy and for their victory that their success story has been overshadowed by Zidane’s sob story.

However Zidane can be comforted by the fact that although his team didn’t win the trophy he was awarded the Goden Ball by FIFA as the player of the tournament (!?) 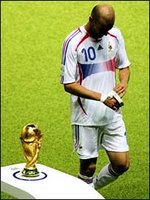 What the fuck is FIFA thinking? On what basis do they give the award? If a player has a slow start to the tournament, being invisible except for the yellow cards he receives in two consecutive games, forcing him to sit out the third, in which his team doubles their offensive output in his absence then returns and makes some nice dribbles and passes, even taking his team into the finals but then gets redcarded towards the end of the most important match in the past four and next four years and leaves in disgrace while his team plays a man short and then loses, THAT’S THE MAN OF THE TOURNAMENT?!?!?

There’s a few voting members of the Golden Ball voting committee that i’d like to headbutt in the chest.