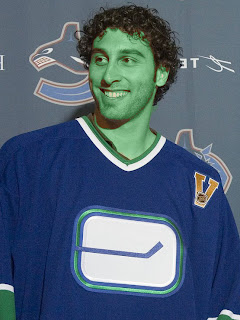 If you’re wondering whether I’m following the Canucks this season, the answer is “Wooooooooooooooo!!”

A couple of days ago I wrote this article for Bleacher Report. And indeeed they went on to win that game against Calgary, largely on the strength of The Incredible Roberto Luongo.

I used to think Luongo was some sort of Messianic savior. But now it’s clear that he’s another type of creature altogether: he’s the Incredible Hulk of hockey.

He took a lot of criticism in the week leading up to the showdown against Calgary for his sloppy (read: average). But that tune has changed. After getting heaped with criticism during the Canucks recent 3-game winless spell, Calgary Herald writer Bruce Dowbiggin basically said Luongo was an overpaid sack of useless.

On the day of the game he suggested that “followers of the Canucks are coming to the uncomfortable conclusion that Vancouver may have to win in spite of their highly paid goalie.”

Don’t. Make. Him. Angry. You won’t like him when he’s angry.

In the 4-1 win against Calgary Luongo stopped 46 of 47 shots, was named first star and basically singlehandedly dragged a so-so Canucks team to the win, drawing them even with Calgary.

And for Canucks fans, that’s exactly what we need heading into the last two games of the season: our best player (and goalie, and captain) performing heroics.

It may have been monosyllabic, but statement made. Loud and clear.