The Other Ryan Millar 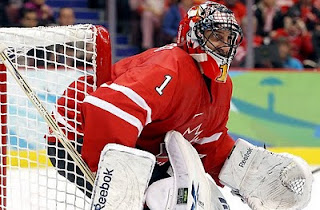 The Men’s Olympic Ice Hockey Final is tomorrow night. In Vancouver. This is a huge deal. The talk is about the two goaltenders: one, the Second Coming. Roberto Luongo. Literally a saviour. The guy is awesome.

The other goalie is some jerk who has the same name as me.

I hate that Ryan Miller prick. For the following reasons:

2. He’s got the same name as me. This is a double-problem because every time I hear the announcers say “Ryan Miller makes a big save,” I’ll be sad. Because I want Canada to crush the USA by filling his net with pucks.

And every time the announcers say, “GOAL! Ryan Miller really should have had that,” my subconscious will be affected and my own confidence will ebb slightly. And I’m hoping that this call happens a lot.