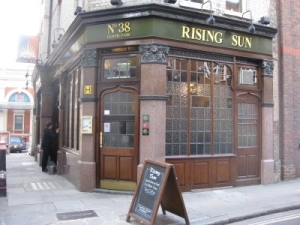 After my haircut at The Wacky Barber, something even wackier happened.

I popped next door to the Rising Sun pub. This in itself isn’t strange in the slightest. Not only do I love pubs and beer, I’ve recently signed up to review pubs for my university magazine. I’d been to the Rising Sun some weeks ago and thought it worth a more focused, writerly visit.

Instead I just had a pint and read the paper. Then, seeing that Fulham was playing Juventus that night I sent my friend David, a Fulham fan, a text.

We swapped a handful of texts regarding the match, football in general, and the need to meet up for a pint in the near future.

By this time I had finished both my beer and my flips through the London Evening Standard. It was time to push off for home.

As I stepped outside I very nearly walked right into my friend David, with whom I’d just spent the better part of a half hour swapping text messages.

So we enjoyed that beer, there and then.

MORAL:
London often seems unwieldy. Despite the many friends, like-minded strangers, and joyous social occasions afforded by the hum of this global hub, you can get thwarted by apathy, gravity, and inconvenience. It can just overwhelm a person.

But then, this unwieldy metropolis will toss you a strange coincidence like finding yourself at the very same pub (out of 7,000 pubs in London), and you’ll realize that sometimes you don’t even need to work at making things happen, they just will.