Deciding where to go for dinner in a strange city is always a crapshoot.

Actually, it’s not so tough. However, it is tricky when you’re by yourself. All of a sudden there are so many metrics that aren’t rated on rating aggregate sites like Yelp and TripAdvisor that don’t really feature: how visible will you be? How good is the reading light? Is there WiFi? And how attentive/pitying will the waitstaff be?

I’m currently in Copenhagen, tagging along on a work trip that Chiara’s on. It seemed like a better idea when we booked my flight a couple of weeks ago.

Since that time I’ve gotten slammed with a bunch of work for various clients. That’s pretty good news, but my afternoon in Copenhagen today was less museum, soaking up the sites, and more me working at my computer.

And I took my computer with me this afternoon and found a nice little cafe and did some work. It didn’t seem weird then, in the afternoon, to be by myself. And Cafe Holberg no 19 is close to the hotel, and so having some lunch and working away seemed sensible.

Besides, being alone in a cafe in Copenhagen seems exotic, and I think some of that interest filters into the work I’m doing. And, as the fact that I’m writing scripts and doing some semi-creative work, the foreign stimuli can only be a positive. At least it’s easily justifiable as such. 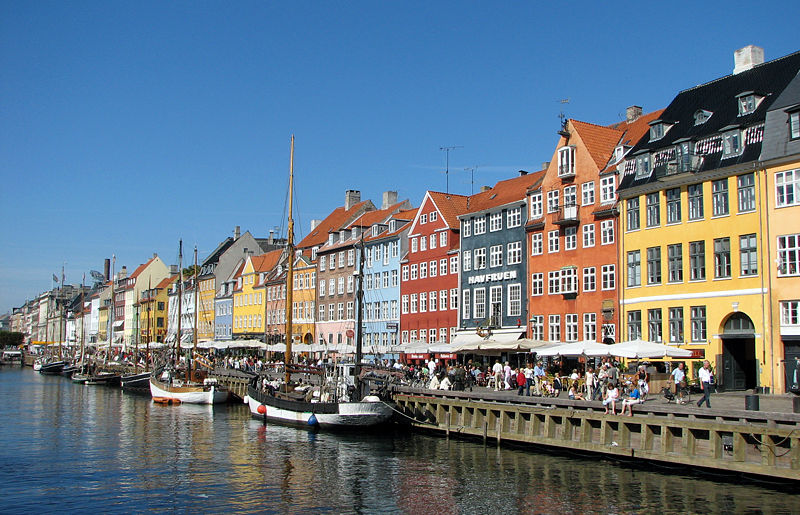 From afternoon to evening
I worked all afternoon up until pretty late, and then, once the latest draft was done I went for a walk and to get some dinner.

Copenhagen is picturesque, especially in the area we’re staying – so it was pleasant to wander. I walked up Nyhavn, which at one time was surely a working harbour, but has long since settled into an identity as a tourist strolling area, with English menus perched on the cobblestone canalside walkway, and stalls selling street beers for anywhere from 35-100 DKK.

Side note: The euro is so convenient and comforting when travelling (and even works relatively on par against the dollar) that when confronted with a currency like the Krone -which bears no easily translatable relationship with the Euro – I found myself totally at sea. I may have scored some very sweet meal deals today, or I may need to rob a convenience store when I get back to Amsterdam, I’m really not sure.

I was starting to get hungry as I walked up the road. Now, the other distinguishing characteristic of Nyhavn is that it was busy with tourists. Usually I’ll use that as an indicator that I shouldn’t eat at a certain restaurant because they pander to the lowest common denominator, and often have inflated prices and deflated standards.

But my biggest problem at this point was that tourists travel in packs. Or couples. And every restaurant – catering as they do to tourists – had tables full of people conversating and drinking. Public tables, filled with groups no smaller than two.

The solo hunt continues
So I carried on up through the main square, into another promising looking district. I wandered in and out of side streets, scrutinizing windows and menus, dismissing them for being variously: too busy, not busy enough, too unhealthy looking cuisine-wise, and too healthy looking cuisine wise.

And as I started getting a bit more concerned that my meal might be in jeopardy, I stumbled upon the Cafe Dan Turell. I almost dismissed it just on the basis of it being a restaurant, and that seemed to be the way things were going for me.

But there in the corner, I saw the beacon of a laptop screen – another solo diner!

And so I went in, and got a seat in the corner, managed to read a chapter or so of my book, and eat a meal that matched my appetite perfectly. So all in all a winner.

After-dinner thoughts in lieu of dessert
Though my meal was good, this isn’t so much a restaurant review. (However, if you find yourself in central Copenhagen and traveling alone, the Cafe Dan Turell is worth a look. Also, as an added insert to this sidebar, it seemed that people who weren’t there by themselves enjoyed it). More this is just the observation that eating alone in public is a different social animal. I just didn’t really know what to do with myself.

It’s not that I’ve never dined out on my own, but this evening I realized that having a regular dinner companion is something I take for granted, and the complement to that is that I need to polish up on my solo dining skills. Eating a meal by oneself isn’t something that be discomfiting. I had to be armed with a notebook, a novel, and phone. But I liked it. It’s different, but enjoyable.

Maybe even enjoyable enough for me to try it some more, possibly even when circumstances don’t dictate it. Fortunately there are resources out there for the solo diner. And I think some movements. I also discovered, too late to assist me in my search this evening, that TripAdvisor actually has a rating for solo dining. I’m already on my way.