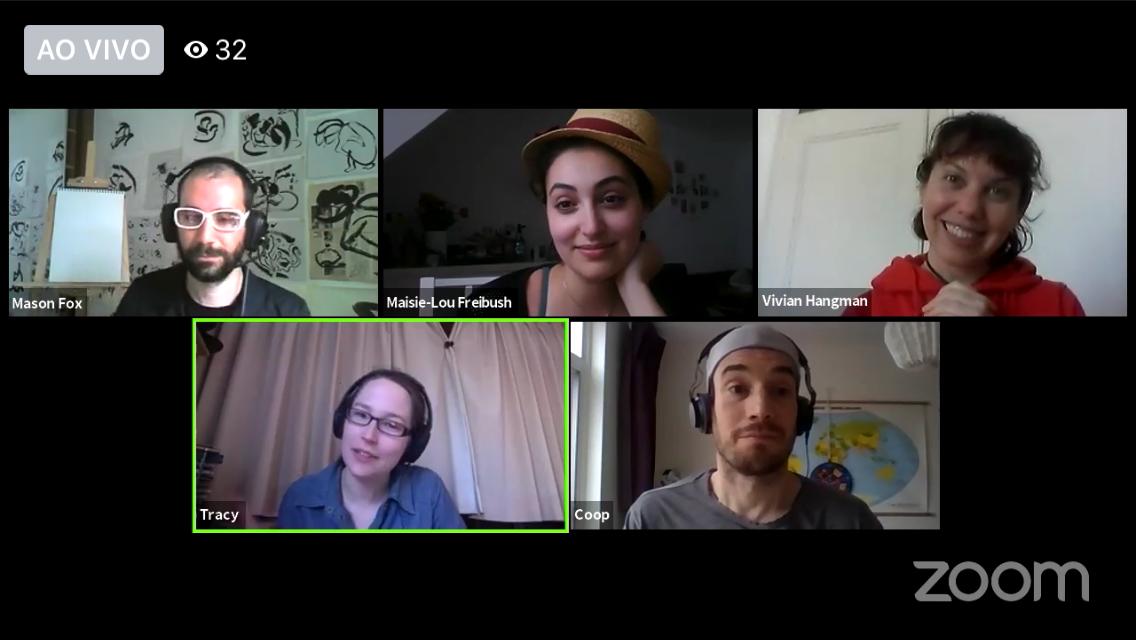 It’s been a long time since I’ve done some improv. More than a year, in fact. But I felt like we’d never been apart, when yesterday I stepped back on the “stage” after a lengthy hiatus. It was of course and entirely online show and festival, and my first experience with that, and I have to say I really enjoyed it. Here are a couple of things I dug about the experience.

The immediacy of improv

I was captain of the team, and was thus in charge of shepherding people together and coordinating the show and format. Luckily, the night before I came up with an idea I quite liked and the group was receptive to it. I elaborated in a message that evening, virtually met the crew that morning, and we debuted the format at that afternoon’s Amsterdam Improv Marathon. That the turnaround can be so swift is something that I value enormously.

The team and I went from strangers in the morning to having a quick and positive debrief after the show like we’d been doing it together for years. Improv has positivity and support baked into the practice, and attracts and shapes like minds in a similar way: making for constructive atmosphere to make stuff up and have fun doing it.

This is largely due to the brave new online world we live in, and partially due to the format we did but I loved having a format that played with, rather than against or ignored, the online reality. For anyone who’s interested here’s the description I sent to the group, and that we performed.

Rather than do a podcast about a particular subject we create a frame that allows for more character and relationship-driven interaction. Our podcast is a small town one, about locals, and we’re just exploring their lives and hobbies and obsessions and things. (it’s a bit related to the classic longform Spoon (or Goon) River — without the death part.

STRUCTURE
The hosts open with some chit chat and then introduce guest 1, chat about that guest’s [thing], repeat times 3. Guests stay on and participate, but focus shifts to new guest each time.

GETS
We get suggestions that can feed the characters, but asked in a slightly more detailed way, along the line of
– What’s a not-online that’s been keeping you occupied at home during the lockdown?
– What was the job one of your grandparents had?
– What was your pettiest fight about?

The characters (who can be loosely defined beforehand) each take one of these things, and that drives the ‘interview’.

Let’s discuss further tomorrow morning, and see what you think. But I think this could be a fun angle. Other option would be to get a topic (like a hobby) and make the whole podcast about that, but I thought by doing it this way we open up more space for characters and diversity of content.

RECAP
Overall, it did exactly as I had hoped, with lots of space for character exploration, and a bunch of relationship components were woven into the play, with backstories and future possibilities emerging from the interplay. It was a half-hour set, but I think with some more time to play, the characters and the way they connect would come out stronger.

Anyway, it was a tonne of fun, and I’m glad to have had the chance to participate, and try out a brand new format in a brand new space with brand new people!