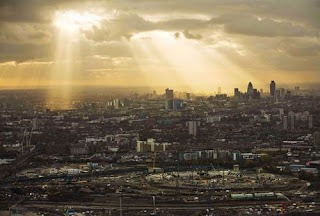 London lied to me. For a whole month. The September sunshine clothed the whole city in warm smiles. The sunbeams whispered in my ear that this was what I could expect from life in London. I was thrilled. Naturally I bought a bicycle almost immediately – weather this good deserves as much facetime as possible. For a reasonable sixty-five quid Harry the Bike Man in London Fields provided me with a garish, but more-than-serviceable multispeed steed; on my second Sunday I rode on my new wheels – a carefree man.

The bicycle is a unique and glorious way to get around the city – you can go anywhere you want at anytime, limited only by how fast you pump your legs. There’s no waiting at bus stops, or long descents into oppressive tube dungeons. Traffic? What traffic? You just scoot between the locked grids or slip down a side street. You don’t even need to wait at traffic lights if you’re of a more daredevilish constitution. It’s pure freedom in the sunshine. Everything was perfect, how could it ever go wrong?

Of course, I made a fatal flaw – I had allowed myself to be sucked in by the autumnal warmth to such an extent that – despite negative forecasts and foreboding skies I rode my yellow and purple pedal-machine to university yesterday. So far, everything is still great.

Until I went home.

The ride home was fucking awful. Sometime between the start of class and the end, the weather went from cold and gray and humid, to cold, gray humid and very very very wet. The kind of rain I would call ’drenchly’. As the Inuit have many words for snow, I have many words for rain, but not enough expletives.

By the time I arrived home I was dripping icy rain from my waterlogged hat to my squelchy shoes. And I was cold. More importantly, I was depressed.

“There’s no fucking way I’m going to do that tomorrow,” I muttered, wringing my jeans out into the kitchen sink. “In fact, I may never do it again.”

The thing that hurt the most – apart from my frozen knuckles – was the betrayal. To follow on from a September-long parade of dry warmth with weather this relentlessly foul seemed unnecessarily nasty. A couple light sprinkles or a windy afternoon to prepare me mentally for an inclement winter does not seem like an unreasonable request – especially not among friends. Or had I misjudged the city and our relationship?

I spent the evening slurping soup, drinking mugs of milky tea and frantically making contingency plans. If this was how London was going to be, then – pfffffft! – we were done. I would spend, insofar as it would be possible, all of my time here under a roof. I worried that my bike would remain chained at home, rusting away for the foreseeable future, an innocent casualty in a love affair gone suddenly sour. But it had to be done. As a final sign of my resolve I placed my Oyster card into the pocket of my jacket.

When I awoke this morning I immediately looked outside – prepared to shake my fist in defiance. There was no need: the sky was pure clear blue lightly streaked with cirrus clouds, and just the occasional puddle to remind me of yesterday’s cruelty. In a moment, all was forgiven.

Perhaps the first month wasn’t a lie; perhaps the wretchedness of yesterday was just a test. If it was a test, then I passed. Rather than staying off my bike, I got right back on. If it wasn’t a test, and was a fair but brutal warning, then I have heeded it – the Oyster card remains in my pocket.