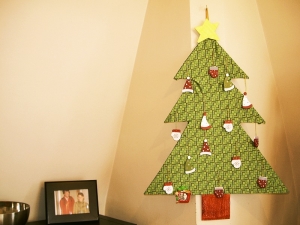 In a departure from our usual holiday habit of travelling to Canada or Italy for yuletimes, this year we’re staying put.

In another switch-up, we’re hosting Chiara’s dad, his wife and their two kids. This means that it’ll be a house full of Italians. And also, as hosts, it’s up to us to Christmasfy the house.

To me, that means drinking an unhealthy amount of eggnog and decking halls to the tune of a song with the word ‘christmas’, ‘bells’ or ‘santa’ in the title.

But we couldn’t get beyond the tree debate. While I hate senseless murder as much as the next upstanding citizen, I was struggling to imagine a Christmas household without a tree.

Fortunately my wife is a handy and resourceful genius, so we spent Saturday night together – not just decking halls, but making a Christmas tree out of cardboard, crayons, and some leftover fabric.

As you’ve no doubt already noticed. It’s pretty sweet, our tree. Especially decked as it is with two small boxes of decorations received from my parents some years back.

Also, this ornament from my brother and sister, which always makes my throat a little lumpy around holiday time. 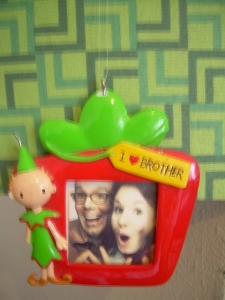 Our adorable and plucky little tree has quickly swung me over to the ‘advocating for homemade Christmas trees’ side of things.

As a bumper crop of holiday frivolity, we’ve got a little burglar Santa scaling our bookcase. He came to us from Chiara’s mom awhile back, and though his foot’s a little gluey, and it’s not clear why he doesn’t just come down the chimney, he’s also part of our Christmas decoration family. 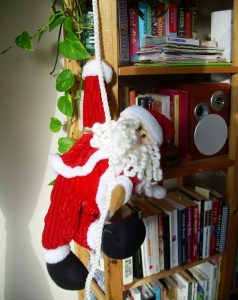 So, though it doesn’t smell pine-scented in here, it’s starting to feel a lot like Christmas here. There is also a string of lights. I didn’t post a picture here, but trust me, we’ve got some lights encircling our sliding glass doors. So the decorations are all in place.

Just one thing left to get set:

I recently noticed that our only Christmas album is last year’s Bob Dylan’s Christmas in the Heart. It’s also our only Bob Dylan album.

So, my request is for any other hot Christmas tunes/albums that won’t make anyone want to smash the stereo. For example, The Chicharones ‘Straight outta Noggin‘. Or any of these I discovered just now.

And then, also, we could do with some more Bob Dylan. I’ve heard that before he put out that Christmas album he made some other music that is also pretty good.