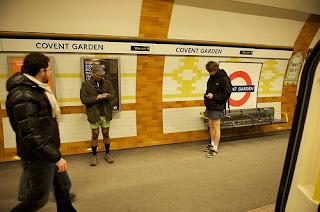 In the UK, ‘pants’ always means ‘underpants’. ‘Overpants’ are always referred to as ‘trousers’ here.

Though embarrassing in the UK, in the rest of the 15 countries involved, the event is actually called No Pants 2010.

This small distinction resulted in much cross-cultural hilarity as the North American participants in the No Pants Subway Ride 2010: London (myself included) were prone to referring to it as a ‘No Pants’ event. The Brits would have none of it – it is a ‘No Trouser’ event here.

Regardless of what you call your leg-coverings, we all took them off and went for a ride on the underground in our underwear.

The Trouserfree London Tube Ride had about 32 ‘agents’ – as Improv Everywhere event participants are known. There was also some three photographers snapping pics. Idil’s Flickr set is here.

After some logistical hurdles and an – as it turned out – overly-optimistic holding pattern (“but 200 people signed up on the facebook group!”), we set out on foot from Trafalgar Square to chart a course from Leicester Square to Earl’s Court on the Picadilly Line.

We spread out along the platform and prepared to enter the train (as if we were all strangers). As the train approached I was already reading. Besides being a pretty strong piece of commuter camouflage, I still had a couple sections of my Saturday Guardian to get through.

After the first stop we all awaited the signal from Team Leader Seamus to drop trou. Initially, when the six of us in my carriage all de-trousered, the reaction was mild surprise.

I just leaned up near the door, at the end of the car. Reading. Finally the guy next to me (after a few stops) asked me why I took my trousers off.

“It’s hot in here,” I explained.
“But what about them?” he asked, gesturing to the other bare legs in the carriage.
“Yeah, they took theirs off too,” I agreed.
For some reason this seemed to satisfy his curiosity.

After our trip to Earl’s Court, we took the return trip to Leicester Square. It was pretty crowded on the way back. This meant that most people could only really see one agent at a time. There were some stifled giggles, and quizzical looks, but no interaction that I noticed. Except for the lady who got up and changed seats to be further away from me – not so much interaction, but at least acknowledgment.

Then we went to the pub.

With some confusing instructions and the general tendency for people wandering around tube stations in their underpants to operate with less than military-grade precision, our group had begun to dwindle.

By the time we exited the tube and made for the pub we were about a dozen. Almost all had re-panted for the exit of the tube, save for myself and three other holdouts.

After a quick celebratory beer, (now retrousered) I bade farewell to the rest of the agents and made my way for another tube ride. This time I would be doing it in my denim pants, not in my under pants.

PS: When I did my farewell-bading, Seamus was still in his shamrock boxers. He said he’d take the tube home in them. I don’t doubt that he did.

PPS: It’s tough to gauge reactions while affecting an air of nonchalance (or reading the paper), but they seemed quite mild. However it was the mild mischief, rampant silliness, and camaraderie among the agents that really made this worthwhile.

PPPS: 147 years ago – January 10, 1863, the London Underground first opened. What better way to commemorate this momentous occasion than to have a bunch of strangers ride the tube in their underthings?

Right, there should also be cake.

UPDATE: Daily free paper The Metro does a nice little write-up.
Also featured on the London Underground blog. Also on Sky News. Seems to have been quite a newsworthy event.