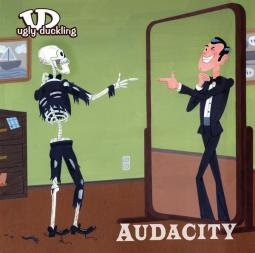 I’ve been a fan of Ugly Duckling since I picked up their first ep back in ’99 (f-f-feel my cred!). Fresh Mode.

The line that sticks in my head from back when I was spinning that particular platter is this, from the track ‘We’re Here’:

I wanna entertain the millions/
from the Russians to the Brazilians/
In a club, amphiteatre, stadium or pavilion/
Gimme the mic, I’m as inflatable as helium/
Rhythm is tight, like Big Pun in a medium.

First time, I saw them they were opening for Dilated Peoples (I think), at Richard’s on Richards in Vancouver. Every act that took the stage that night threw down, but Ugly Duckling’s beats, rhymes and good-natured vibe got that night off right. Second time I saw them, they owned the Purple Onion in Gastown. I will soon be checking them for the third time, here in BXL.

To illustrate their particular brand of awesomeness, I insert this picture (from their website), in which they’re launching their second LP, ‘Taste the Secret’.

It’s a concept album about a battle between the Meat Shake franchise (they make milkshakes out of meat, natch) and Veggie Hut: a bunch of stinky vegetarians who make tofu everything. 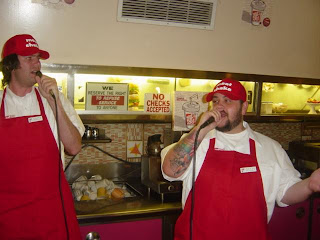 You don’t have to tell me it’s awesome… I already know.

Dizzy, Andy and Young Einstein come Old School-correct with good-natured (funny! clever!)rhymes, catchy hooks, dope styles, and a great stage show. So you can bet I’ll be there at Botanique this Sunday when they throw down for all the heads that’ll be nodding that night. The best part? Tickets are less than 10 euros.

A good, though not-very-spellchecked review of their new album, Audacity.