So yesterday was full of good news. The second bit was that I didn’t get the job in Amsterdam. The desk job. That sucks, I suppose, to not get gainful employment, but the suckness is cancelled out by the relief. At the interview, when the interviewer asked me how I would handle a job where I had to be at the smae place from 9 to 5 five days a week. I thought about it, and gave a carefully composed answer about how I was looking forward to the challenge. However, I couldn’t disguise the terror that flickered ever so briefly across my face when he posed the question. I don’t know if that’s what deep sixed the employment opportunity, but it’s a moot point now.

The bestest news is that Chiara and I went whale watching yesterday and SAW WHALES! 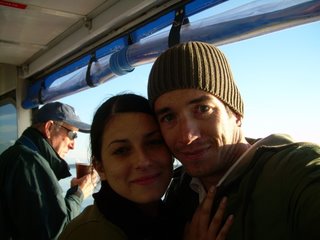 Look how happy we are at the end of the day.

Our day started at 7am, but we weren’t whale watching until almost 4 in the afternoon.
That’s because we got the royal jerk around from these guys Seafun Safaris. They kept us running around all day and they were insincere and basically pissed us off. In fact when Chiara, my dad and I went whale watching with them I didn’t want to but I acqueisced. I like to think my gut feeling was correct.

Anyway, as their last boat of the day left at 2:30 without us we were capital P pissed. Not so much at them, but a little bit. Plus I knew that we really had to whale watch because that was Chiara’s only real wish in Canada and she’s so beauctiuful when those wishes come true. And she doesn’t take disappointment well.

Anyway, we went to Prince of Whales and gave them our sob story, about the hundreds of dollars we’d spent and how Seafun promised to “exceed our expectations” when in fact they coulldn’t even meet them and so on.

They were very nice. They didn’t let us on free, but they (the booking guy) gave us a fantastic deal, so we bought them all chocolate bars. Asa well he gave us a 95%chance to see whales. And was right.

They took us out in a big boat that fit 74 people on it’s previous trip and had just 17 on ours. Spacious and comfy. We saw a transient orca family of four, spyhopping blowhole breathing, general whaleness. It was a forty minute trip out and forty back with over an hour with the orcas. No bullshit, just whales and sunshine. As well we were well educated by the personable and knowledgeable staff. It was gorgeous late afternoon west coast sunny, the water was glassy calm: it was all around a “win.”

Fuck Seafun Safaris. Whale watching was awesome with Prince of Whales. P.S. We didn’t see the Seafun boat out where we were, which means they probably weren’t seeing whales (again).