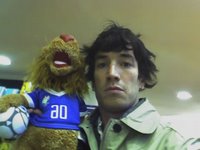 What’s going to happen?
We’re all wondering aren’t we? Will it be total dominance by the Brazilians? Or perhaps a strong charge from the home team, hyped on their opportunity to impress on home soil? Or something else a little more unexpected….

I think we can count on the eventual winner coming from some traditional football powers: Brazil, Argentina, Italy, Germany, England. But in the tournament, nothing is a sure thing.
Can England cope with the fact that Rooney, though kicking a ball now, has a broken metatarsal and his replacement is a 6ft 7in hat-trick scoring robotdancer?
Will Ukraine be able to kick off the iron curtain and prove some post-Soviet football ideal in their first World Cup?
Will the civil war in Cote de Ivoire inspire these players to heal the North-South divide with the biggest trophy of them all?
Will Togo, Trinibago, Saudi Arabia, and Angola score more than 1 goal between them?
How’s the team from Serbia and Montenegro going to perform now that Serbia and Montenegro are two different countries?
Will my fantasy football team Fashionistas UY destroy all comers?

And how big (how fucking big) will the party be here in Italy if the azzurri hoist the Jules Rimet?

I hope to find out…