Predicting the playoffs inevitably involves carefully weighing a number of factors including point production, past head-to-head matchups, key injuries, coaching style, and all sorts of other criteria.

What is rarely (if ever) taken into account is team names. Let’s break down the NHL Western Conference first round playoff matchups using that as our sole criteria. 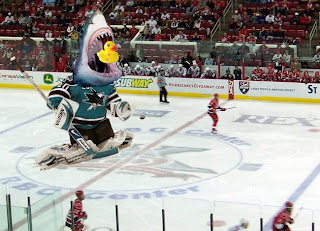 Nature, this is your cruelest match-up since ice vs. dinosaurs. Sharks can smell one part of blood in a million parts water. They have three rows of teeth. They are pure stone-cold killers.

Ducks paddle around in shallow ponds and eat bread crumbs. The feathers of their babies are used for extra-soft pillows.

Prediction: Sharks in one short snack. Oh wait they have to play four games? Sucks for you, ducks.

The rest of this article is over on the Bleacher Report. Read it, rank it, vote for it. 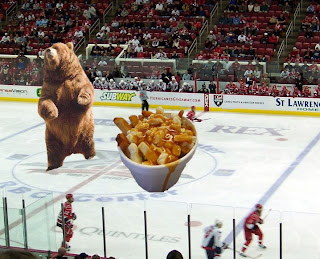 Bruins are bears. Bears are fierce wild mammals with formidable jaws and fierce claws. Canadiens are the French-Canadian inhabitants of Quebec, well known for its freezing cold climate and delicious poutine.

While Canadiens are clearly a hearty and resilient breed of human, not even the warmest winter-weather gear can protect them from a hungry Bruin. They could try feeding it poutine, but that would only delay the inevitable.

Human vs. bear: always, but always, bet on the bear.

Rest of the Eastern Conference here.